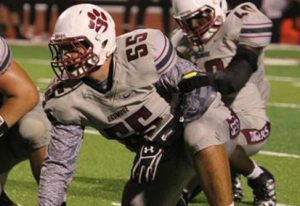 Big and athletic OL who has a huge upside and plays very tough and physical. Has very good hands and uses his feet well and finishes off blocks with authority. Seals blocks well and knows how to use his feet and hands very well vs. defenders.

At 6-2, 295-pounds, Brayden is a very tough player who has good feet and finishes off blocks well with some extra authority.

Has received the most interest from Western Illinois, Air Force, and Abilene Christian.

Brayden — My favorite class has to be English, “I love to write papers.”

Brayden — My best games were against Altus and Duncan this season.