Fort Gibson's Morgan a force at LB and a big prospect!! 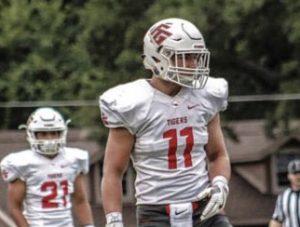 @bcmorgan777
When Fort Gibson plays you will have no doubt who the athletic LB wearing #11 is. Its big time LB and hard hitting Brayden Morgan.

The all out aggressive and fast Morgan is a player that is always around the ball. Big things are in store for this talented Fort Gibson defender.

Brayden—My season started off with a slow start facing top 4a teams in the state. We over cane a lot of adversity and pulled through to the playoffs. I feel like I played well after a few games of getting use to the position and being in the spotlight again.

Brayden—I improved on my overall size and speed.

Brayden—My dad has been the most influential person in my football career supporting in every way possible.

Brayden—I went to both OU and OSU camps. I was able to take away from that my speed will be my one of my main contributors to performing at my best.

Six Star — What college would you like to go to

Brayden—My main interest is Oklahoma University. I’ve visited there a few times and loved the atmosphere and I’ve always dreamed of playing there as well.

Brayden—I’ve had in my career would by Wagoner in the first round of playoffs this year. I had a career high of 9 tackles as a DL/DE. And the defense wouldn’t let them get a yard.

Brayden—would be getting 295 on bench.

Brayden—Tavien Woodworth would be most likely to be a future star as well as the hardest worker in the team.