Borin, dedicated and multi faceted TE has size, strength and versatility to be the best 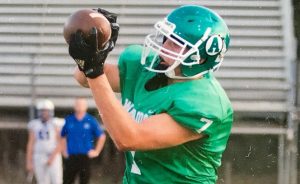 @Brock_borin7
Ranked 12th in Oklahoma in the class of 2020 by @okprepstv, the junior TE from Adair is a 6-4, 230 All-District TE who is one the best in the state and has tons of potential at the next level. Arkansas, Oklahoma State, and Tulsa are just three of the many programs that are very interested in Borin.

The fact the Borin is a multi-dimensional skill set makes him a highly sought after player. Brock can set the edge as a true TE, lead block as a Fullback and catch the ball out of the backfield or split out and take the corner deep. He is a match up nightmare for opposing defenses.

“My strengths are my size and speed, said Borin.” “I run a 4.7 in the 40 yard dash, 51 in the 400 meter.” “I also run on our 4×800 meter relay team. “I can play multiple positions on both sides of the ball.” I have had great season and have enjoyed making the difference by my blocking and going all out on defense.

Brock — I went to a few camps this summer at Oklahoma State, Arkansas, and Tulsa. I took a lot of amazing things away from these camps like how I should use my hands on the line and where I should put my eyes when I am running a route.

Brock— I’ve been raised on the lake so I’m pretty versatile when it comes to music. I can go from Buffett to country and then to rap.

Brock — One game last year I had 3 touchdowns and one game this year I had 10 pancake blocks. I would say every game is a great game when you come out with a dub.

Brock — Nate Ratcliff. He is a freshman QB that’s going to be a stud.

Brock — I would have to say me. I try to be the first on to be at the weight room and the last one to leave the field.