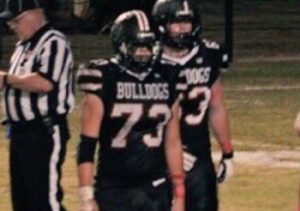 The man you want on your defense is a play maker that knows how to get the ball and can read plays and that man is Bryce Stocks. Posted 30+-tackles and had 6 sacks, 3FF and a fumble recovery and earned all district honors on defense.

Big time physical team ball player that plays hard through and takes on double teams for the defensive end. Does a great job of getting off the ball looking for the sack. Every once in awhile Bryce also throws in a swim move.

Bryce – would have to be Aaron Donald. He’s an undersized guy for the defensive tackle position but he plays like he’s a lot bigger.

Bryce – As far as camps have gone, I didn’t really attend any camps. But I brought it upon myself to get better this summer through lots of push ups and running. It really tested my self discipline that comes in play fighting in close 4th quarter games.

Bryce – has been the same since 1st grade. Listening to X him give it to ya and X is coming and where the hood at. They put me in a bad mood.

Bryce- is God’s gonna cut you down which is another pre game song for me.

Bryce- was against mounds where I had 4 sacks total and 3 in one quarter.

Bryce- was hitting 350 on squat. Which isn’t huge but for me it was a milestone.

Bryce – As far as teammates that could be a star at the next level, Rodney Gray is the most athletic guy I’ve ever been around. His football IQ is really good as well.

Bryce- When it comes to the Hardest working teammate it is probably once again Rodney. He got a lot bigger. And he watches more film than anyone. He’s a real hard worker which is why he took such a big leap in football from his junior year.

Six Star football – player to keep an eye on

Bryce – The college that interests me is ECU because of the distance from home. But I haven’t gotten much college attention except for southern Arkansas