Chisholm's Balenti fast player who is a team leader for team 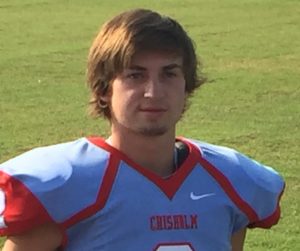 @cbalenti2
One thing you notice when Chisholm High School takes the field is that they have a very special player and a team leader with has speed, knowledge and love the game….Meet a player with a lot of passion…Cade Balenti.

Balenti is a senior on the 2018 squad and worked hard this offseason to improve his game and to make Chisholm a better team.

Six Star — How would you describe your style of play in your position to those who have never seen you play before?

Cade —I would describe my game as fast. I feel like the first thing that would come to people that first see me play is that I’m fast. And I can block well on the outside for my teammates.

Cade —This season hasn’t been the best for me, we had a rough start to the year, and then I dislocated my shoulder and I’ve been out for two weeks. But that doesn’t stop me from supporting my brothers on the field. Blocking is one thing that has improved from last year to this year. And maturity is one thing that has changed for me.

Six Star — Tell us about the experience and what you were able to take away from it, what camps you attended?

Cade —I’ve been to a couple of camps. I went to NWOSU, UCO, and OSU this summer. And I went to Rivals Combine in Dallas, Texas. When I was at those camps there were some good competition all over. I loved competing against some of the best athletes.

Cade —My coach has been the most influential. He sees the potential in me and has played me since my freshman year. He has believed in me through all my good and bad games.

Cade —NWOSU has some interest in me and I’ve been on an unofficial visit to McPherson in Kansas, but the school that has sent me the most letters is Texas State.

Cade —Before games I always pray right after we run out of the tunnel.

Cade —I listen to country music, but I don’t have a favorite song, but my favorite band if Florida Georgia Line.

Cade —History, but my best class is Math.

Cade —My sophomore year against our rivals Henessey. I had 3 receiving touchdowns and it was the funnest game for me.