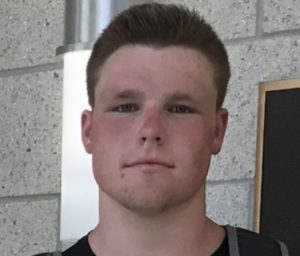 @cade_buchanan7
Meet a pro style QB with a great arm and a competitive edge to his game….meet one of the best in Oklahoma, Durant’s Cade Buchanan. When his teammates need those extra yards who do they think of first….You got it…Cade Buchanan. Every team needs a player to move the chains and get the job done and Cade is that type of player.

Cade—I learned how to deal with adversity more than anything this past season. Most of all it helped me become a better leader no matter what the game was looking like.

Six Star —What did you learn and improve on this offseason

Cade—My main focus during the off season was to get healthy and up to speed due to a couple of injuries. I emphasized on my footwork throughout my recovery and ended up benefiting most from that.

Cade—The most influential person in my football life has been Coach Counce, since he instilled in me at a young age to stick it through and finish what I started.

Cade—Several of the camps I attended this summer include Tulsa’s Friday night lights camp, UCO’s Mega camp and ECU. At each of these I was able to take something that helped my game.

Six Star — What schools have shown interest in you the most

Cade—I am very appreciative to have received the most interest and scholarship offers from both UCO and ECU. Along with interest from Tulsa University and Abilene Christian University

Cade—I am naturally left handed, but learned all my sports right handed due to watching other kids on my youth teams.

Cade—Run out of the tunnel last in order to give all the kids that cane to support a high five on the way out.

Cade—My biggest milestone was when I power cleaned 235 for the first time.