Seminole QB holds one offer, hearing from several other programs. 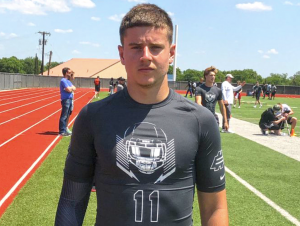 One of the state’s top quarterback prospects in the 2019 class, Seminole’s Cade HammondCade
Hammond
QB | 6'1 | 180
Seminole | 2019 is putting together another big season for the Chieftans helping his team to a 6-2 record.

At 6’1, 180-pounds, Hammond is an unselfish player who will do whatever it takes for his team to get a win.

Hammond spent the offseason attending several camps, including the Elite 11 Regional in Dallas as well as the Rivals Combine in Dallas.

“It was great to go be able to compete against the best of the best,” he says. “I feel like my speed has improved, and so has my arm strength and accuracy. With all this happening my confidence with all my abilities is up as well.”

He currently holds an offer from Northeastern State, and has received some interest from Midwestern State, Emporia State and Drake University.

Six Star Football recently caught up with Hammond about his senior season.

Cade — Baker Mayfield, he brings a certain energy to the game that is unmatched and he plays the game with passion

Cade — My pre game ritual is going to eat at subway and sit at the same table each week.

Cade — My favorite song is probably gotta be Nightmares of the Bottom by Lil Wayne.

Cade — My favorite class is most likely history, I like to learn about those things

Cade — My best game I would say was week 5 against Lincoln Christian, we were underdogs but we all played lights out and won by 20

Cade — My biggest accomplishment in the weight room isn’t a max lift, it’s the I know that I left it every time and I went as hard as I could. In my opinion, that’s more of an accomplishment than how much weight you lift.

Cade — Cameron Gunville, he’s crazy explosive and he’s very hard to bring down, I think if he works hard he will make an impact somewhere at the next level.

Cade — I think it would be Jared Stewart, DE, that guy loves every bit of practice and I’ve never seen him not going as hard as he can.

Cade — WR/S Chico Baker, he runs well, runs great routes, and catches everything thrown at him, and on the other side he is an aggressive ball hawk.