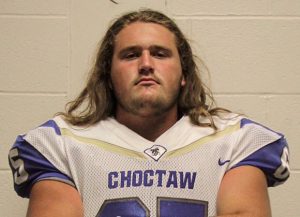 Standing 6-5, 275 Choctaw High’s Cade Kelly is a towering presence on the Oklahoma prep scene. A play that plays with an edge, a mean streak if you will, he is very nasty as most good offensive lineman should be.

Kelly’s physical skills, his determination and desire to be the best set him apart from your average offensive lineman. Its this that has recruiters like North Texas and Missouri State very interested. Area schools UCO, Northeastern State and East Central also are in the mix for Kelly.

Cade —My O-Line Coach has been very influential in my high school life.

Six Star — How was your offseason this summer

Six Star — What did you improve upon the most this summer, what schools are showing interest

Cade —I got a lot stronger this offseason, I dropped 30 pounds and gained 20 back in muscle, I have a bunch of D2 schools showing interest and a few D1 colleges that are close to giving me my first D1 Offer. Probably the D1 school that is showing the most interest is North Texas.

Cade —I listen to Hurt by Johnny Cash while I get taped.

Cade —My teammate and fellow tackle Tye Gilbert has the potential to be a great player at the next level.

Cade —Isaiah Sumlin he is a Tight End and D- End.

Cade —Cade McConell a freshman Left Tackle for Choctaw, he has the potential to become a leader a great Offensive Lineman.