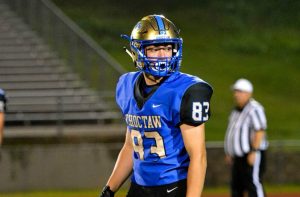 @cadesanford2020
A player with a tremendous work ethic and a great ability to be flexible and move wherever his Choctaw coaches needs him, Cade Sanford is a receiver that makes his team better each and every day. His best skills are that he is smart when it comes to learning the defenses tendencies and making in-game adjustment. One of the up and coming athletes in the junior class to keep an eye on, coaches should take notice of standout junior Cade Sanford of Choctaw.

Six Star football – What camps did you attend

Cade-I’ve been to different camps like Dime Droppers, Camp With The Champs and OBU’s camp