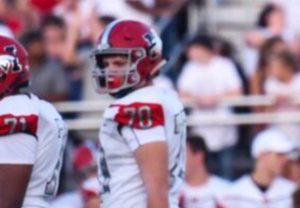 @cadew_15
Meet Cade Williamson, a big and strong player standing 6-4, 260 that is making a big name for himself at Mustang High School. When you watch Cade you notice that he has some really quick hands and feet, not to mention that he is a very athletic lineman. Williamson has always been a two sport athlete who plays football and baseball, and is very versatile on the line. He can play tackle, guard, or tight-end and is one of the most coachable athletes you will find as well as being a team leader for Mustang.

Williamson attended Oklahoma State camp and competed very well against other top ranked Oklahoma players as well as players from all over the country. During this past offseason Cade worked on building muscle and getting quicker. Cade plans on attending both Oklahoma State and Oklahoma camps this upcoming offseason. Southern California, Ohio University, Southwest Minnesota State, Sam Houston State, Arkansas Tech, and Oklahoma Baptist University have all been schools that have shown interest. Williamson has been invited to these schools on unofficial visits and has been invited to their camps.

Cade – I attended the Oklahoma state camp and I learned from that is how much more competition there is all over the states, and just working with other linemen was good for me as well. During this offseason I have worked on building muscle and getting quicker.

Cade- My pregame is listening to music and picturing what I’m going to do in the game.

Cade- is “Lost and found” by tee grizzley.

Cade- My best game was against Edmond Santa Fe.

Cade- to me is just getting stronger and building muscle.

Cade – Judson Roland could be crazy at the next level.

Cade- Player to keep and eye on is Kahry Brown.