Gunville, one of the best downhill runners in the state, big potential at Seminole 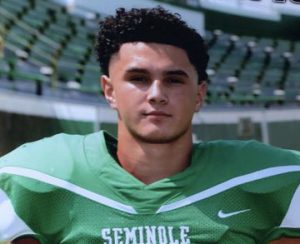 @CameronGunville
If you are looking for one of the most talented running backs in the state, look no further than Seminole, Oklahoma where downhill runner Cameron Gunville is proving himself.

The junior has some great vision and is one of the most capable players we have seen of making great cuts and also showing some nice patience to let the play develop. The 6-0, 150 pound runner is a top 100 ranked player by VYPE and a kid we love the upside on with his skill set, he is a gamer.

Cameron — I went to the camp at OU and I got to see all the other players from around the country. I learned what improvements I need to make based off of what someone else did better.

Cameron — I improved on my speed and strength and definitely my ability to move laterally. I studied film to increase my knowledge on opposing defenses. I also improved working on my jump cut. My pass/run blocking has also increased greatly.

Cameron — Ohio, West Virginia, OBU, Houston, Marshall, and I recently received an email from Harvard. Ohio has shown the most interest in me so far.

Six Star —Pre Game Ritual
Cameron — My pregame ritual is to have the same subway sandwich every week and say a prayer before I go out to play.

Cameron — Russ – Wife You Up is currently my favorite song

Cameron — My squat was my biggest accomplishment I got it up to 415lbs from 355lbs in one summer.

Cameron — My friend Saybion Battles because of his versatility and knowledge of the game plus the speed he has along with his catching the ball in traffic ability.

Cameron — I actually have 3 teammates who are constantly in competition to make each other better and all work so hard it’s difficult to single one out.

Six Star —Teammate to Keep an eye on

Cameron — Jarred Stewart at defensive end. He definitely has the tools to be a good D1 athlete. With a little more speed and size I would be shocked to not see him receive offers to play at the next level.