Francis Howell Central running back gearing up for a big senior season. 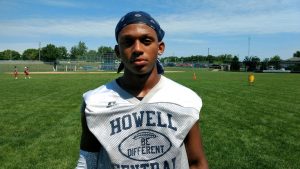 Francis Howell Central 2018 running back Cameron Hatten is gearing up for a big senior season after a big offseason of work in the weight room.

At 5’10, 160-pounds, Hatten says he runs hard and tries to pick up the tough yards and keep the chains moving for the Spartans. He led the team with nearly 600 yards rushing a year ago and three touchdowns.

He played his best game of the season against St. Charles West as he rushed for 194 yards and scored a touchdown to help lead the Spartans to a hard fought 26-25 win.

As a returning senior for a team that is coming off a 2-8 season, Hatten says he also tries to bring leadership and a positive attitude to the field.

“I bring hope and leadership to my team because there are times when we will be playing really bad or losing a game and some of the younger guys and even the older guys give up on themselves and the team,” he said. “I’m always there to let them know it’s not over and there’s always a way we could come out victorious no matter what the circumstances are.”

This offseason, Hatten has worked hard in the weight room to get bigger and stronger.

“One thing I’m trying to work on but can’t really do much about is my size,” he said. “I’m always in the weight room and my numbers are just as high as the bigger guys on my team but I can’t seem to gain any weight or get any bigger at all.”

Hatten began playing football when he was 5 or 6 years old and says he started out playing flag football and continued from there.

He says his friends and family have had the biggest influence on his football career and help keep him motivated.

“They always tell me I have a chance to go to a good college and really shine there,” Hatten said. “That’s one thing that motivates me to keep going.”

A fan of the NFL’s Leonard Fournett, Hatten wears the same jersey number as the Jacksonville standout.

“He is a player that I like to compare myself to not only because we wear the same number but because I would like to be able to grow to his size and run people over like he does in every game,” Hatten said.

“There has been a lot of trash talking going on on their end so we’re just going to sit back and remain humble prepare to step on the field and show them what’s up,” Hatten said.