Will Rogers High's Carlos Lopez makes a impact at TE 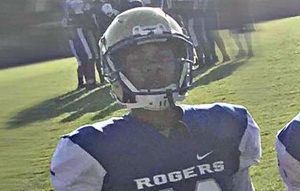 @CarlosL43441578
Will Rogers Carlos Lopez is a player that simply makes his team better by the type of player he is. Lopez shows very quick ability off the line, and is aggressive towards the offensive line.

Very unique, quick to get in the back field. He is a player that makes his team better each and every day.

Carlos – during my summer I attended “summer pride” which is the name of our summer workout for the school. I also spent time in the boxing gym. • some of the things that I myself improved on during the off-season were weight lifting everyday , working on hand drills , and running to improve speed and stamina •

Carlos- Pre game ritual(s) are praying as a team or as an individual. Also starting a chant and getting the team pumped up before the game. •

Carlos- I would say is Gerald Croom Class of 2021

Six Star Football – player to keep an eye on