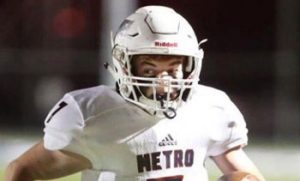 Carson – I didn’t attend any college camps over the summer but I definitely plan on going to some next summer. My main improvement was my blocking but also I improved on getting off the line of scrimmage when the defense was in man.

Carson – Normally I listen to music and watch some film right before the game.

Carson – Either History or Anatomy.

Carson – Our first round playoff game against Victory Christian I had 208 yards and 3 TDs.

Carson – Gaining 20 lbs since last football season which has really helped on defense when I play in the box.

Six star football – teammates to keep an eye on