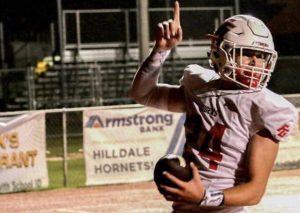 @c_tladd
Meet an aggressive and very smart TE that also holds an advantage over smaller DB’s and stands 6-4 for Fort Gibson.

Carson put together a very fine season and had 19 receptions with 301 yards and 2 TD’s. He is one of the many talented weapons that the Fort Gibson offensive relies on, from talented RB’s to some very good receivers.

Carson—I feel like I had a pretty good junior year, but there is a lot of things i need to work on.

Carson—My dad, he takes me to camps and encourages me to do my best

Carson—During the summer I went to the OSU camp, and the UCO camp. Going to these camps made me realize that I need to get a lot stronger and quicker to be able to play at the next level.


Six Star — What colleges are looking at you

Carson—I went on an unofficial to OSU, but I have also talked to OSU,NSU, SNU, and OBU.

Six Star — Most people don’t know this about me but i:

Carson— sit by myself and listen to music


Six Star — teammate most likely to be a college star

Carson—there is a couple on our team. But I would have to pick Jesse Rudd

Carson—Brayden Morgan and Karson Austin are the hardest workers