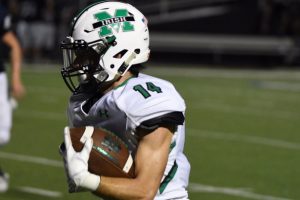 @carterpience2
Need a play, need a receiver, need a running back, need a special teams standout. Carter Pierce of OKC’s Bishop McGuinness is the ultimate team player and role player for the Fighting Irish.

Carter- to my game has been my receivers coach, Coach Lanham.

Carter – I haven’t attended any summer camps. I feel like my weight, strength and speed during the off season.

Carter- is just kind of dancing around and jamming out to popular rap music.

Carter- is Splashin by rich the kid.

Carter- best game was against Lawton Ike this last season.

Carter- My best weight room achievement was maxing 375 on squat.

Six Star Football—Teammate to keep an eye on