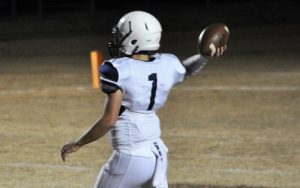 Meet one of the top QB’s in Oklahoma in Minco’s Cavin RussellCavin
Russell
QB | 6'1 | 200
Minco | 2020. He has an uncanny knowledge of the game and is one of the most committed players you will find.

There are plenty of QB’s that have strong arms, they are tall, (prototype for a QB) but if you put Cavin up with the guys that are considered to be some of the top recruits, he has the knowledge part of the game and can work just as hard if not harder!!

Cavin—Many colleges are looking to offer Russell by the end of his Senior year. Some of those schools that are in the early mix are McPherson, SW Oklahoma State, Oklahoma Baptist, and Pittsburg State. McPherson has talked to me the most, that’s the only place I’ve been on a visit and actually talked to the Head Coach.

Cavin—Cavin passed for 1,319 yds in the air, 13TDs and only allowed 3 Ints. He got hurt this year and only played in 5 full games.

Cavin—My best games this year were our playoff games, I really feel like I went off.

Cavin—I’ve been attending camps at multiple colleges including TCU, Oklahoma State, and North Texas being a few of them.

Cavin—During the summer before the 2018 season he went to a bunch of camps to get my name out there. Big things were gonna happen and a bunch of colleges were interested, and were all telling me to have a big year. In the first game of the season Cavin got hurt, and resulted in me only getting to play in 5 games. But in 5 games I still threw for 1,319 yds and 13TDs and only 3 ints. When I was still in Junior High I had a lot of bigger schools, Tuttle, Newcastle, El Reno, Mustang, and Putnam City, all wanted me to move and play High School ball at their High Schools but due to all my family being at Minco we decided to stay and play with my life long brothers