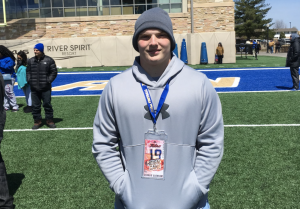 One of the better lineman prospects out of the Oklahoma City area in the 2019 class, Edmond Memorial senior Charlie SuenramCharlie
Suenram
DT/DE | 6'3 | 280
Edmond Memorial | 2019 is drawing significant college interest this season.

At 6’2, 280-pounds, Suenram is a strong, tough player who uses violent hips and hands to get to the ball carrier.

Six Star Football recently caught up with Suenram and asked him about his senior season.

Charlie — The most influential person in my life is my Dad.

Charlie — My favorite class is probably my AP economics class.

Charlie — Would be against North or Enid this year.

Charlie — I held 10 school lifting records at one point this year for clean, snatch, squat, and bench.

Charlie — One of my hardest working teammates is JJ Ruff. He always goes above and beyond the lift and workshard in practice.

Six Star — Keep an Eye on

Charlie — Keep an eye on Carson Mullins and Clayton Hedges next year as they will be the stars of the defensive line. They will both be returning starters and have the opportunity to tear some teams up.