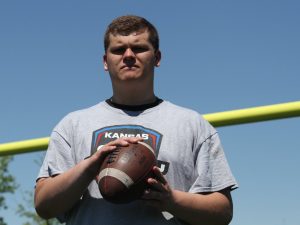 Chase
Hutchison
OL | 6'3 | 290
Raymore-Paculiar | 2019 is putting together a strong summer in preparation for the upcoming season and is already starting to turn the heads of college coaches.

A 6’3, 295-pound lineman, Hutchison is an aggressive player who looks to set the tone on the line on the first play of the game and the entire contest.

“I like to be the leader of our offensive line,” he said. “I feel like I bring an up tempo style in practice as well as games. I like to play every play like my last 110 percent every time.”

He was a big part of the varsity this past season and helped his team put together a strong performance in the playoffs against Lee’s Summit.

“The most important game I played in this year was the playoff game against Lees Summit,” he said. “We had previously lost to them bad in the regular season. Then we went to their place in the play offs and beat them. I performed much better that game as I came more prepared by spending every day watching film and working hard at practice.’

This offseason, Hutchison is working on his footwork, explosiveness and strength.

“All the main things I believe lineman need to be successful,” he said.

Hutchison says the most influential person in his high school career has been Mark Simoneau, a former NFL player who head up Simoneau Sports Performance (SSP).

“He has believed in me ever since I’ve started going to SSP and he told me I could do whatever I wanted to do,” Hutchison said. “Coming from a former professional athlete I took this to heart and have been working even harder since.”

Hutchison says he is a fan of Alabama offensive tackle Jonah Williams.

“As many people know offensive lineman are not the star of the show in college or professional football,” Hutchison said. “However I’ve watched Jonah Williams in high school and seeing him perform like he did as a true freshman at Alabama was incredible.”

Although he currently does not hold any offers, Hutchison says he has drawn some interest and been to a handful of 2019 days on college campuses, including the Kansas Jayhawks in Lawrence.

“I have not received any offers but that is not what is important to me right now,” he said. “Helping my team win by me getting better is what is most important.”