Laker lineman emerged this offseason as prospect to watch. 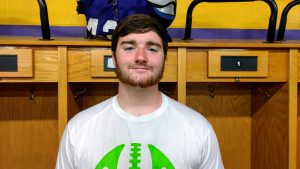 Camdenton 2018 OL/DL Chazz Sawyers is emerging as a player to watch this season after a strong spring and summer of workouts, conditioning and camps.

At 6’3, 260-pounds, Sawyers brings an aggressive mindset to the trenches.

“That’s the ultimate key for an (offensive lineman),” he says. “I have to come off the ball with intensity. The whole play. That’s one thing I try to encourage throughout the team. A positive mindset helps you do your job better than you think you can.”

Additionally, Sawyers brings strong leadership skills as a senior and says he takes pride in having a positive attitude.

“I don’t downgrade any of the players, I try to encourage them,” he says. “If they mess up, I like to pick them up and speak good things. I tell them that it doesn’t matter. The next play is the only thing that matters. All that really helps us play our best.

“I like to be one that others can look up to. That is something that is important to me. I like to be a person that people can go to. Or someone who is always calm is tough situations. Leading by example is important.”

Sawyers says in retrospect, a potential turning point last season was a contest against the Rolla Bulldogs as Camdenton won 56-14.

“That when I earned a starting spot halfway through the season,” he said. “I missed a good part of the early season because I transferred here. I had a very good game. I had a few tackles. A fumble recovery … it was a good game for everyone.”

This offseason, Sawyers has been focused on learning the Lakers’ schemes and being ready physically and mentally.

“I’m new to this offense and I have a lot to learn,” he said.”I have been spending time making sure I am very familiar with the offense. I’ve also been making sure I am ready physically. Working hard whenever I can. I’m much quicker off the ball. I have been working on everything Coach Shore says, and tings I know I need to work on in my own time.”

He says his father has had the biggest influence on his football career to date.

“He always pushes me to be better and do my best. I’ve always had second thoughts about football. But he always encourages me to keep going and work harder. Be aggressive. Always push yourself and protect the ball,” Sawyers said.

Although he currently does not hold any offers, Sawyers has drawn interest from several FBS and FCS schools this offseason, attending numerous camps to showcase his skills.