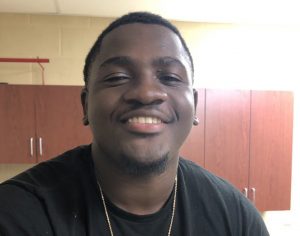 Has some strength and brute force with weight room numbers of 315 bench, 500 squat and a whapping 550 deadlift. One major thing that sets him apart is his ability to move his feet, get outside on run plays quickly then smash his blocking assignment. Has proven physically he is a notch above the competition and has a nasty streak at Edison and he flat out man handles DL/DTs. Has been a key blocker to what we consider Oklahoma’s top RB, class of 2020 sensation Sevion MorrisonSavion
Morrison
RB/WR | 5'11 | 187
Edison | 2020 this season. Baah has committed to Tulsa and had been offered by Navy, South Dakota State, and Western Illinois just to name a few of the many.

Six Star —How has your season been going this year

Chester — My season is going great. We started of slow as a team but have been climbing up the ladder and have some great things in our future. I’ve dominated everyone I’ve played against and I’m earning respect after every game.

Chester — The most influential person in my football life has been my former coach Bob Craig. He thought me how to make essential blocks and the technique for each. Also my stepdad (Tony Aidoo) is one of them as he introduced me to the game.

Six Star —What skills did you improve the most upon during the off season.

Chester — I’ve tremendously improved on my leadership skills and the will to fight back on adversity. I’ve also improved in taking coaches and the types of blocks to use in certain situations.

Chester — During the summer I hit two major camps the Nike opening and the rivals three stripe. I excelled at the rivals camp. I did alright in the opening camp but that showed me I had some things to improve on in order to b let my best self as a player.

Six Star —What schools showed the most interest in you

Chester — Pre Game Ritual: Take a quick nap, pray at the 50 and focus on domination.

Chester — My next game is my best cause I keep dominating and don’t reply on the last that much. But I have to say my previous game against McAlester was my best because I was so physical the refs were telling my coaches to lower our intensity. I also had 9 pancakes that game.

Six Star —Players to keep an eye on

Chester — Player to keep an eye on in Christopher Boyd- freshman defensive end. Already has the size to be great and just need to listen and put in hard work. He will be a future 4-5 star. You heard it here first.