Vianney's Caldwell rising the ranks at WR in '23 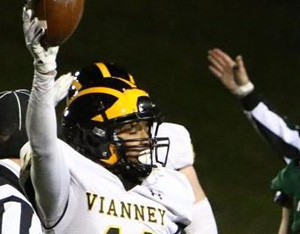 What’s your style of play

Chris – My style of play at the RB position makes me versatile in multiple ways. I can run zone with ease just by my vision & patience. My quickness’s allows me to avoid more tackles on the fly as well. Also with me catching on to the playbook I can play slot when my team goes into specific formations. With me going to this slot position as well, it has taught me to get ready to catch the ball out the back field & run good routes as well. One thing you’ll always expect out of me is my work ethic! (Qualities like hardest worker & calm/mature)

Chris – most influential person is my mom. She has inspired me the most. I learned new lessons everyday from her. She’s the hardest working person I know. She gets her job done and would do anything for me. Even when things are going well or not well she’s always there for me. I love her.

Chris – My influential coach would be actually my coaches now. Coach Masters and Morris have been pushing me ever since I’ve arrived at St. John Vianney for high school. They worked me hard as they could so I continued to do the same with my work ethic. I only learn lessons from them as the days of hard work go by.

What are your off season plans

Chris – the off-season I plan on going to multiple camps and showcases. I want to improve on my all around game and to get better in the weight room. To push myself mentally & physically. Soon to prove I belong with the best of the best next season. My actions are only by faith, not by sight. (I have accomplished some goals already with making Boom,Showcase on my Twitter)

Chris – pre game ritual is always a prayer. Always have been and always will be. God has given me this gift, it was football. When a person ask me how am I good at football, I always say God. For one day this will be my future and the Bible says your gift shall make room for you.

Favorite NFL Player as a kid

Chris – Improved in every category for weight room after season. (Squat,Bench,Etc)

Player that could play next level

Players to Keep eye on