Multi-Purpose RB at Westmoore Christopher Oliver is a player that has a big time future ahead. 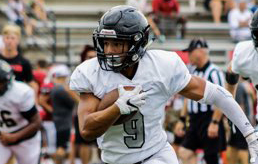 One of the most athletic players and hardest working players you will find is Westmoore High School’s Christopher Oliver. A skilled RB and DB prospect that is getting attention from college programs and has all the tools to be a great player at the next level.

Mainly played RB this season and was very affective with over 1,200 multi-purpose yards for the Westmoore offensive unit.

Six Star —Most people don’t know that I: