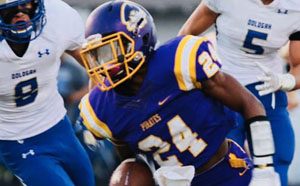 @CJMcCall7
Meet Bristow’s senior RB CJ McCall, a shifty and elusive RB that has the ability and speed to be a player at the next level. McCall has played an integral part of the Pirates offensive success and is a player that looks to gain the attention of colleges with his nice skill set and key athletic skills. Has the ability to be a game changer and is a hard and dedicated back that looks to make a name for himself.

Six star Football – How would you describe your style of play in your position to those who have never seen you play before?

CJ – To those who haven’t seen me play before. I play running back, I am more of a Speed back I’m not easy too tackle in open space. If you put the ball in my hands just know something good is going too happen when it’s in my hands.

Six Star football – Describe your season and, how do you feel you played overall for 2018?

CJ – Well my season started off great. First play of the game I had a 69 yard touchdown run. I lead the team in rushing yards with 8 Carries for 145 yards. But my season didn’t end too well around the 6th game I had a great run I tried making a cut and I tore my ACL, I sat out for 3 games, and I came back too play my last high school game with a torn ACL, and I had a couple of good runs.

CJ – During this off season I improved by getting stronger and faster.

Six Star football – Who has been the most influential person in your football life so far?

CJ- The most important people in my football life is my mom and dad, they have been encouraging me too stay on task and too be a leader.

CJ – I’ve never been too a summer camps. I’ve always just worked out and conditioned, I never had the money too pay for any camps or combines.

Six star football – What kind of college interest have you had so far, and what schools are showing you the most interest?

CJ- I haven’t really had any college interest, and there’s not any schools showing me interest. I’ve been to two visits and that was at NEO and at UCO. It was a great experience just by being around a lot of fans cheering you on, and seeing how nice the facility’s are

CJ – am a very great athlete, I’m a cool and chill person too be around I love to workout and do football drills. Things have changed sense my grandparents passed away but I remain humble and try and do my best for them.

CJ – Before games I walk the football field with my earbuds in and reminisce on all the good plays I’ve had. I also think of all the plays I’ve learned so I don’t forget them during the game.

CJ – Chosen one by Future

CJ – My favorite class in school is English 4.

Six star football – What has been the best game you have had in your career and why?

CJ – The best game I have had in my career was against Kellyville ponies, I scored 4 Touchdowns one was sweep and 3 of them were on special teams I ran 2 punt returns back for a TD and a Kick return for a TD too end the game.

CJ – My Biggest weight room accomplishment was getting 235 on bench and 315 on squat.

Six star football – Teammate likely to be a college star?

CJ – One of my teammates likely too be a College star is Kyren Johnson he puts in time and works hard too get better. He’s also committed too UCO.

CJ – The hardest working player on my team is my little cousin DJ Overstreet.

Six star football – Player to keep an eye on?

CJ – Also DJ Overstreet is a player too keep an eye on, kids a stud. He’s gonna do big things in the future.