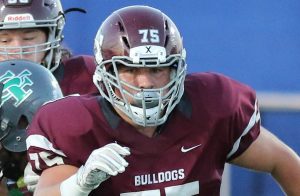 Junior DL Clayton Hedges is one of those great players who gets his team going, a player that has several skills and make a lot of plays on the DL for his Edmond Memorial Bulldogs.

Hedges has a very high motor on the field and uses leverage and footwork to get around offensive linemen. He is tough and has the endurance to be successful playing both sides of the ball. Has some nice skills in lateral movement, but also has the ability to take on double teams.

Six Star — what did you improve on during this off season:

Clayton—I have improved on my strength, especially upper body strength, and we have been focusing on my speed as well.

Clayton—I haven’t attended as many camps since I am a dual sport athlete, however I did attend a Tulsa University Camp where we worked on individual positions. While there I was able to get a feel of what they value in a defensive lineman which was footwork and hand placement. Being there helped me see what changes I needed to make to be a more effective lineman.

Clayton—My dad is my most influential person in my life. Through him I have seen what it means to put your family first and that hard work pays off in the end.

Six Star — What colleges have been looking at you

Clayton—Currently, I am communicating with many D1 and D2 programs and am in the initial stages of recruiting. My film has made it to many coaches that have put me on their watch list.

Clayton—My pre-game ritual consists of a prayer and getting wrapped for the game.

Clayton—One Headlight by the Wallflowers

Clayton—Jenks. Knowing I was going up against one of the best teams in the state pushed me to a new level of mental preparedness. It paid off, during the game I got a sack and a couple tackles with a majority of them being for loss.

Clayton—We have yet to max this off season, however I have done 13 reps for 225 on bench.

Six Star — Teammate that could be big

Clayton—Carson Mullins has a great attitude and is stronger than most defensive ends in 6A.

Clayton—J.J Ruff put in a lot of hours in the weight room and is always prepared to done whatever the team needs from him to win.

Clayton—Aiden Hamlin is incredibly fast and is very shifty. Because of this he can be very versatile playing in the slot or outside receiver. He is currently a sophomore.