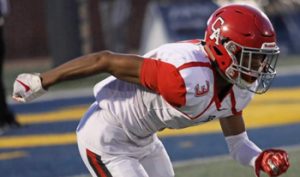 How would you describe your style of play at your position to those who have never seen you play before?
Cobe – I’m considered an athlete because I’m able to multiple positions such as WR/RB/QB/CB/Special Teams.
Most Influential Person
Cobe -My Parents Greg and Tawanna Crews
Most influential Coach
Cobe – My Uncle as he was the one who introduced me to the game I love and has continued to coach and mentor me in football and life. As far as Highschool, I would say Coach Farley.
Name a relative that’s also a great athlete if you have one.
Cobe – Elijah Sherman “R.T.” (Oklahoma State Linebacker) and former Carl Albert State Champion
Tell us about your goals in the offseason as a player
Cobe – To become a better leader on/off the field
What has been your most memorable game and why
Cobe – My last game of my Junior year in the State Championship game, because not only did I block the opponents field goal attempt, but I also caught the ball in mid air and ran it back for a 75 yard touchdown. The play was then tweeted by Overtime and has more than 12k views.
Pre Game Ritual
Cobe – praying
Favorite song
Cobe – Bop by Dababy
Favorite Class
Cobe – Spanish
Favorite NFL player now
Cobe – Tyreek Hill
Favorite NFL player as a kid
Cobe – Deion Sanders
Biggest weight room accomplishment