The HYPE MAN...meet Cody Henderson, the man who gets Chisholm football fired up 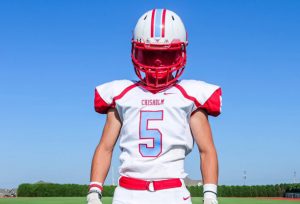 @Cody_henderson3
Every team as that emotional leader the gets the team pumped, excited, ready to go. Then the go out of the tunnel like a wild animal or have a huge special teams hit. One of those players without question for Chisholm has been Cody Henderson.

“I’ve been known to be the hype man on all my teams and can get a team fired up in matter of moments even when we’re losing or down by 21 I can get a fire going, I’ve usually been the smallest player on the field but I can deliver a hit.

Cody—I’ve always looked up to Cole Beasley through my football career, he’s a small guy like me and gets hit hard but he always get back up and nobody can cover him one on one in the open field he’s too fast elusive and I feel like I’m a younger version of him

Cody—have really had to work on catching, it didn’t really come naturally to me but I can catch just about anything now

Cody—is to listen to a Ray Lewis speech right before I have to put my shoulder pads on. It’s normally the one he had on madden 13 about being to small, not big enough, not fast enough.