Lebanon quarterback running the triple option to near perfect. 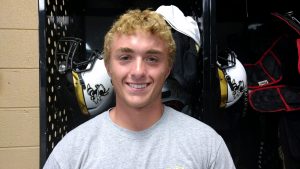 LEBANON — With the spread becoming all the rage in the modern era of high school football, Lebanon’s Cole Breeden has mastered the art of a throwback offense of sorts — the triple option.

A 5’10, 195-pound senior quarterback, Breeden threw for 640 yards, 11 touchdowns and three interceptions while rushing for 574 yards and nine score as he helped lead the Yellowjackets to a 7-4 record and to the district championship game.

The team returns several key performers and is in its third season running its new offense.

“Our offense is good this year and we are known for how we handle the ball,” Breeden said. “We are a heavy read triple option. We spend the majority of the time running the ball. I’m always ready to make a big play if the run game isn’t working.”

A year ago, Lebanon attempted just 86 passes compared to 489 rushing attempts, and the ‘Jackets have lost Breeden’s No. 1 target, Jack Ehrhardt, to graduation. Ehrhardt accounted for 471 receiving yards and 11 touchdown receptions.

“I’ve been working a lot on my passing game,” Breeden said. “We don’t pass the ball that often. When we do, it’s usually a big play, and I need to be ready to go. I’ve also been working on making better reads. We have been working on that in practice. I’ve been trying to make sure that every read is right. We have three options and you have to make the defense work for everything they can get.”

Breeden says the most important person in his football career to date has been his dad.

“He is important to me, he played in a junior college in Kansas,” Breeden said. “He played tight end, and he always pushes for me to be the best I can be. That’s helped me a lot.

“We have a really good football program here in Lebanon. It starts with flag football and works up to tackle. Tackle starts in third grade or so. I got my start there. My dad has been involved with it and football was always something that was big in our family.”

Breeden says the game that stands out the most from last year was a week 7 rally against Joplin in which the ‘Jackets came back from a 21-0 deficit to win 42-35.

“We scored two touchdowns and came back after half and we ended up winning by a touchdown after it looked like they were going to pull away again,” Breeden said. “We ended up winning by a touchdown. It was a big game for our entire team. It pulled the team together. It really takes an entire team to make a comeback like that. We were all down that we were losing early, but we stayed with it.