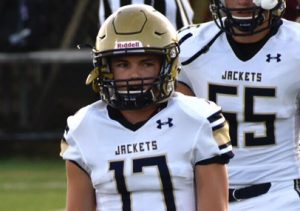 A 5’8, 165-pound athlete, Crosswhite can play a variety of positions, including running back, receiver and defensive back. Through four games, he rushed for 170 yards and hauled in six passes and scored two touchdowns.

“I play fast and I try to make people miss in the open field,” Crosswhite says. “ I’m very blessed to be given these talents and love using them for my team.”

Crosshite spent the offseason attending multiple camps, including UCO, ECU, Emporia, Tulsa, OBU and ACU and says the experience helped prepare him for his senior season.

“I met new people and learned about their skill set and how i can take their game and learn from it,” Crosswhite said.

He has heard from a host of college programs, including NWOSU, ECU, Emporia State, UCO, OBU, NSU, and ACU.

Six Star Football recently caught up with Crosswhite and asked him about his senior season.

Cole — I have definitely got stronger this offseason. We have a great coach in Coach Nall who pushes me very hard on and off the field

Cole — very low key for me. Just make sure I’m ready and my teammates are engaged.

Cole — Favorite song has to be Freestyle by Lil Baby. Fav class is definitely Modern History.

Cole — My best game is prob my junior year when we beat tuttle. I was so proud of my team and the locker room party afterward was ridiculous.

Six Star — Teammates likely to be impact players at next level

Cole — Jett Declan Trey these are only some of the teammates that will be successful at the next level these guys are the best there is.

Cole — is Tyler Borelli now he isn’t the most athletic or fastest but that dude works his tail off and I respect him greatly for it.

Player to keep a eye on?

Cole — Zac Goodwin he gets very little attention but is one of the greatest athletes i know. Not just in football but in baseball as well.