TROY — A versatile performer capable of helping a high school football team in a variety of ways, Troy Buchanan 2018 Collin Nichols has emerged as a player to watch in the St. Louis area. At 6;0, 218-pounds, Nichols has been a team captain since his freshman year and says he takes pride in being... Read more » 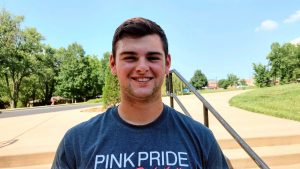 At 6;0, 218-pounds, Nichols has been a team captain since his freshman year and says he takes pride in being a versatile performer and a team leader.

Last year, Nichols rushed for 646 yards on 90 carries (7.1 yards per rush), and scored four touchdowns. He also caught five passes for 95 yards and on defense he was second with 78 tackles and led the team with three sacks.

“I love to play explosive at the linebacker position using my technique and strength and speed to get around my blockers and attack and finish every play,” Nichols said. “I am someone my coach can put in to be a play maker defense, offense, special teams it doesn’t matter,” he said.

A year ago, Nichols said Troy picked up a key conference win over Francis Howell Central on Homecoming. He scored the game’s final touchdown to put an exclamation mark on a 45-30 win on a 32 yard run with two minutes remaining in the game.

“It was the first conference win in years for the program and first homecoming win in years and being able to bring my team to a victory in that game will be unforgettable,” Nichols said.

Nichols says he started playing football in kindergarten, the youngest age you can start playing in Troy. Entering his eighth-grade year, he played for Corey Patterson, the current coach at Trinity in St. Louis and the North County Cowboys.

“(The) team was very special as it was filled with the most talent in Missouri with many guys from that team having 15+ offers today,” Nichols said.

Nichols says his father has had the biggest influence on his football career to date as he has pushed him from the beginning to reach his potential.

“(Lewis) is who I look too for leadership being one of the best defensive players of all time and the greatest leader of all time,” he said.

Nichols currently does not hold any offers, but has heard from several schools, including Missouri Baptist University, SEMO, Indiana State and South Dakota University.