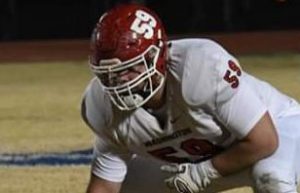 @ConnerBryce65
Despite being undersized, Conner Bruce of Washington is a tough and aggressive lineman who makes his team better each and every day. He is for sure one of the better 2A linemen in the state and is a player that is very hard to get a good rush against with his physical style of play and good leverage and technique

Six star football – The most influential person to me

Conner – is without a doubt my mother, through everything we have been through she refuses to give up.

Conner – I haven’t been to any camps this summer but I plan on going to as many as possible next summer. I have improved on my speed and using my hands and feet more.

Conner – Any college would be ideal and none so far but don’t sleep on me.

Conner- has to be watching some of my past games and seeing how much better I can be.

Conner – Is murder on my mind by YNW Melly.

Conner – was against Millwood this year.

Conner – My brother Devin Orr Is a great teammate and exceptional Quarterback.

Conner – is Logan Lile he pushes us and is truly a sled dog.