Yukon's Berry is player who has a big heart and passion for the game. 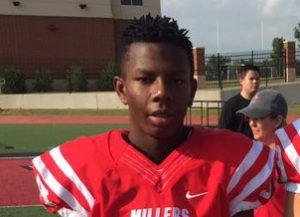 On the radar for football fans, opponents and potential college recruiters should be Yukon junior Coyle Berry.

He has some quality skill sets that all coaches look for and need…He is quick….he is agile. He has those things you can’t teach, some natural ability that translate great on the football field. He is also a kid with a big heart and passion for the game, something else you have to have but can’t teach.

Coyle—My friend Caimon has talked to me about being a leader and has been a great mentor to me, unfortunately I wasn’t able to get any exposure at any of the Camps this past summer but I do plan on attending camps in the future.

Six Star —What schools have looked at you

Coyle—I haven’t had any schools talk to me yet, but I know they’ll be coming soon after my senior season starts.

Six Star —Most people don’t know that I:

Coyle—work at homeless shelters in my free time

Coyle—I look at the obituary of my grandma and cousin, they’re the reason I play football,

Coyle—Math Because I’m good with numbers

Coyle—was probably getting 500 on squat

Coyle—would have to be Aaron wolf by far

Six Star —Player to keep an eye on: