Dalton Perry, Bixby lineman a player that has unique footwork and a passion for the game 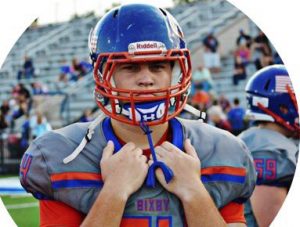 @DaltonPerry5454
The talented and tough nosed Left Tackle, understands that size and strength are always important, as with any line spot, but it’s his unique speed and footwork that help just as much as size. This makes him one of the best OL you will find. He is the first to give thanks to his coaches for repping footwork everyday

Dalton—Our off season program is most likely the toughest in the state, from running 28 110’s to metabolic plays, our off season has brought our team together to get through the tough workouts and has allowed us to get stronger and more athletic as-well as being more conditioned than our opponents

Six Star — The most influential person in my football career

Dalton—Thus far has to be Coach Burchett, he’s not only a coach but a role model our O-line can look up to, as-well as being a great coach and helping further my football career

Dalton—I attended SPA this summer, which is Bixby’s summer program, which is one of the toughest things any football player could go through, doing which has helped my speed and strength, I also attended the Eastern Oklahoma OL/DL camp, where some of the best coaches and former pro ball players come together and help coach OL/DL players from around the state, at this camp I learned a lot about my position and how to be the best left tackle I can be, we trained footwork, hands, pass and run blocking, and schemes, I highly recommend this camp to anyone who plays line.

Dalton—In college I hope to pursue a career in engineering, football wise, I haven’t received any looks or offers yet, but I’ll keep playing as hard as I can in hopes to continue my football career.

Six Star — Most people don’t know this about me, but I:

Dalton—I love working on my truck, a 1984 Chevy that I helped build with my hero, my dad

Dalton—After warm ups and the short practice before the game, once we go inside I like to lay down and just picture myself making big plays, green light thoughts, as coach Montgomery calls it

Dalton—Da art of storytellin’ by OutKast

Dalton—Best game I’ve ever had in my career our game was against Muskogee, our whole O-Line came together and worked as a unit, running plays smoother than we’ve ever ran them, from outside zone to pass plays, I think I played the best game of my career.

Dalton—my favorite class is AP Physics, taught by Mr. Davenport, it’s a fun and practical science class, I’ve learned a lot in there