MANHATTAN'S ILAIO A FORCE TO BE RECKONED WITH FOR MANHATTAN 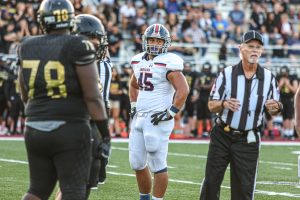 Style of play
Damian – my style of play is reliant on strength and finesse, to use my strength to get separation from the guy in front of me, and then use my hands and moves to get around or straight through him to my target
2019 stats/honors
Damian – 48 tackles, 13 TFLs, 5.5 sacks, 1 FF, Defensive Player of The Year for Centennial League, All State Defensive First Team Non-Senior list
My most influential person
Damian – in my life is probably my mother, she’s been in this football journey with me since the beginning.
My most influential coach
Damian – is probably Coach Adam O’Neil
Athletic relative
Damian – My uncle Moa was a great athlete for Missouri Valley College, he’s a big inspiration for why I wanted to play football
Offseason goals
Damian – my goal this offseason is to grow in the weight room and get lots of exposure
My most memorable game
Damian – was this year’s regional game against Lawrence Freestate, when I went against Turner Corcoran, one of the best in the nation, and I proved myself to be a top tier lineman
My pregame ritual
Damian – is to practice my pass rush and shedding moves on the field, going up and down, music blasting, with lots of energy as if it was in game it gets me in the zone
My favorite song
Damian – for a minute has been “Highest in The Room” by Travis Scott
My favorite class
Damian – is Math or Orchestra
My favorite football player
Damian- has always been Marshawn Lynch, his drive and the way he carries himself has always been admirable to me
My biggest weight room accomplishment
Damian- was either benching 367 or cleaning 315
Teammate could be college star
Damian – I have a lot of teammates who are really good, Dayne Aschenbrener and Cade Wilson stand out
Hardest working teammate
Damian – my whole team works hard, special shoutouts to Jaden Magaña, Jeramiah Estaquio, Dawson Alesna, and Hunter Boyer
teammates to keep an eye on
Damian – and people to watch out for are my two teammates on the d- line, Darius O’Connell and Deshawn Edwards

★KANSAS QB’S MAKING THE GRADE YOU NEED TO KNOW

★KANSAS CITY DEFENDERS ON THE MAKE

★WICHITA PLAYERS ON A MISSION FOR 2020