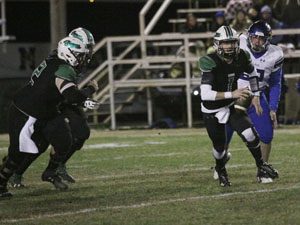 Daniel
Jackson
WR | 6'0 | 185
Bishop Miege | 2020, a player with a huge future ahead of him. Jackson is a dual threat quarterback who plays in the small and traditionally football rich town of Jones. With that comes a player that knows how to be very versatile and flexible and player that can master the playbook and a player that has the ability to utilize his legs as well as his arm.

Calm, and collected Jackson is the man you want leading your team and has proven he can easily take a drop and go through a progression in the pocket as well as being able to make decisions and go through progressions while he is on the run. Jackson racked up 2,200 yards passing, and approx. 100 yards on the ground for the District 2A-2 champions who finished with a 10-2 record.

Six Star football – Describe your season and, how do you feel you played overall for 2018?

Daniel – Our record was 10-2. Coming off a season ending acl injury in game one last year, I feel as if I played well, but not to my full potential. With that being said I’m hungry and working hard this off-season to make a good run at my senior season.

Daniel – Being at a new school it’s been a little tough to form solid relationships and be an influential leader. I’ve been working on forming good relationships with players as well as working on perfecting throwing mechanics and ultimately the craft of playing Quarterback itself.

Daniel – My QB coach. Coach George has been a great influence not only on me as a player but also a person.

Daniel – Last summer I attended 9 different camps ranging from division one 1 day camps to grind camps such as the reload series with QBimpact. I’ve learned a lot about the importance of character and relationships as well as learning a lot about me myself.

Six star football – What kind of college interest have you had so far, and what schools are showing you the most interest?

Daniel – Our Newkirk game this past season. It was round 1 of playoffs and everything clicked. I ended up throwing 5

Six star football – Teammate likely to be a college star:

Six star football-Player to keep an eye on