Tipton bright spot for one of the state's top teams. 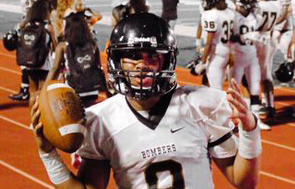 @DavioneTipton
Midwest City is a program rich in tradition and success and one of those reasons is the stream of outstanding talent they have had, most recently Davione TiptonDavione
Tipton
DB | 5'8 | 140
Midwest City | 2020 is a player that fits that mold.

Tipton plays CB, one of the hardest and most challenging positions on the field, one that can expose any weakness in a defender. At first glance you might see just another 5-8 undersized corner and think hey I’m going to pick on this guy. So far Tipton has proven a lot of teams wrong. Schools like East Central, Oklahoma Baptist, McPherson, and Arkansas Baptist have shown early interest.

Six Star — What camps did you attend over the offseason

Davione —I couldn’t pick because we all ball out

Davione —Bentonville, Arkansas got my first big plays there