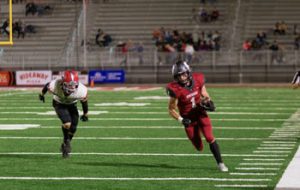 @Dawson_adamss
Look for one of Owasso’s top returning players to be the hard working defensive class of 2020 product Dawson Adams. Adams racked up 55 tackles on defense and scored 4 touchdowns with an 8.8 yards per attempt average and nearly 200 yards for the Rams offensive unit on the 2018 season. Look for him to factor into the Owasso offensive and defensive success for the 2019 campaign. He is a great team player that works very hard to make his team and himself the best he can be.

Dawson – we had a rough start but we bonded through the season and gave it all we had. overall it was a good season for us

Six star football – What did you improve upon during the offseason

Dawson – I definitely improved in the weight room and becoming a true student of the game.

Dawson – probably my dad. ever since I was a kid he was throwing me a football or watching it on TV with me and teaching me little things here and there.

Dawson – I only attended the TU Football Camp this past year. I learned some great things at the wide receiver position that helped me this season. I plan on going to a lot more this summer.

Six star football – What schools have been looking at you

Dawson – I have been talking to a few schools through twitter but nothing too big right how.

Dawson – have twin brothers that are 15 and they usually beat me at just about any sport we play. it’s hard to admit but it’s true

Dawson – math, my mom is a math teacher and math comes natural to me

Dawson – the state championship game my sophomore year. I’ll remember that game for ever and was happy I could do that for the seniors

Dawson – Kejuan Hay. He is graduating this year. He just committed to Pitt St. and will be a baller there. He would have been a high prospect if he hadn’t had gotten hurt the first game

Dawson – is Hagen Hood. He plays running back for us and didn’t get many varsity reps because of his size, but you can always count on him to give it his all

Dawson- a player to keep an eye on is Mario KirbyMario
Kirby
TE | 6'0 | 220
Owasso | 2020. He started as a sophomore at tight end and dominates D1 athletes. He should blow up this year.