Eldon senior continues to raise his profile with big offseason. 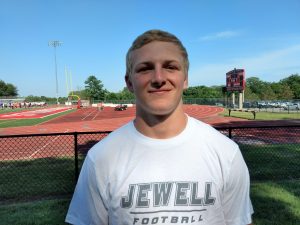 Dawson
Brandt
S | 6'1 | 180
Eldon | 2019 is gearing up for a big senior season on the football field after helping the Mustangs advance to the Class 3 quarterfinals last season.

An aggressive player, Brandt started on both sides of the ball and plays special teams. He likely projects as a safety at the college level and brings a high football IQ to the field.

He says he prides himself in his conditioning and a relentless attitude.

“I never come off the field during a game,” Brandt says. “I lead my team by example. I never get tired. I work hard on my conditioning and make sure that it is second to none. I get this work ethic from being a wrestler. I don’t know how to quit, give up or let up.”

The team’s starting QB and safety as a junior, Brandt helped Eldon go 11-2 and advance to the Class 3 quarterfinals where they eventually fell to Mt Vernon as he rushed for 863 yards and passed for 807 yards and 28 total TDs. On defense, he recorded 109 tackles six tackles for loss and intercepted two passes.

“I feel like I played very well and helped lead my team deep into the state playoffs,” Brandt said of his junior season. “We were able to make school history by getting to the state quarterfinals. This gives me the edge when we are playing under pressure. This helped prepare me for any situation. You must have ice in your veins and a short term memory.

“By doing what we did last season, we know what it takes to get that far and we have goals to surpass that this season. We have team goals and I have person goals that will be met.”

At 6’1, 185-pounds, Brandt says he has added 25 pounds of muscle since last season and is working on his speed and agility. He has also excelled in baseball, track and wrestling during his high school career.

Brandt says his father Mike Brandt and his coach at Eldon since he was in third-grade, coach Shannon Jolley, have had the biggest impact on his football career.

“My father gave me a solid foundation to prepare me for high school football,” Dawson Brandt said. “He has always pushed me to be the best player I can be. He taught me how to be a good teammate and how to show great sportsmanship win or lose and always stay humble. Remember who I am always.

“Coach Jolley taught me the importance of paying attention to details, how to push myself and others to reach our maximum potential. He was also like a second father to me teaching me how to not just be a good athlete but a better man and role model to those younger than I am.”

However, Jolley recently accepted the head coaching position at Jefferson City where he will take over the ‘Jays.

“It was tough hearing he was leaving for my senior year but I know that he and I will always have a good relationship and I will forever be grateful,” Brandt says.

Brandt has spent much of the spring and summer attending a host of camps and combines and showing off his athleticism, including the Lindenwood Mega Camp, the Williams Jewell Mega Camp, Northwest Missouri State, Missouri Western and the Iowa State Thursday Night Primetime camp.

He also plans on attending camps at SBU in Bolivar and Drake University in July.

“I was able to work with some great coaches and see some good competition while at these camps,” he says. “The coaches were able to teach me some different techniques to help with pass coverage. I was able to start forming relationships with different coaches. Overall, my camp experience has been pretty good.”

Although Brandt does not currently hold any offers, he has been in contact with several college programs throughout the summer.

“I feel like I can compete at any level and I will always embrace being underrated, that keeps me hungry and wanting more,” he says. “Being a four-sport athlete in high school and competing at the highest level has prepared me for this upcoming season as well as the recruiting process.

“I will find the right ‘fit.’ For now, I am going to focus on my high school team and season. I will also focus on scheduling visits. I let my actions and stats speak for themselves. I am excited to see what happens.”