Physically dominating and talented OL at Deer Creek is emerging as an elite prospect. 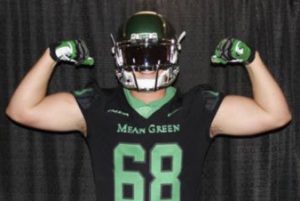 @ByersDaxton
Byers is the guy you don’t want to see across the line from you. Before you game you scouted you know to expect, sorry it doesn’t matter. He is just bigger, more physical, and more determined to beat you and wear you down. Play after play he beats his opponents down.

“Then you will eventually crush their will to play & they will stop trying & make your job a lot easier, says Daxton. “Go hard until the whistle every play. One of the most dominating lineman in the entire state, he is as good as they come and has the attitude to make it big at the next level.

Daxton —My most influential person is my grandad, he never lets negativity affect his life and he is a great person.

Daxton —This past summer I went to a lot of camps. OSU, NUC of Houston. Baylor, TCU, SMU. Arkansas, Nebraska. Didn’t go on many visits, just a lot of camps.

Daxton —The main thing that helped me get out this summer was the Nike opening. I got in & put up some really good numbers for my position& after they sent out the numbers the colleges starting talking to me. From the end of my junior season to the Nike opening camp I had went from 6’4 260 to 6’5 295 during the summer. I had hit a huge growth spurt & got in the gym & got myself on the radar. & my 5.26 40 time & 26 inch vertical at 6’5 295 was very good.

Six Star — What did you take away from camps

Daxton —What I took away from the camps was that you have got to stand out of you want to be noticed. You can’t just do what everyone else is doing. You’ve got to play harder & dirtier than everyone else in order to get looks. This season I played a lot smarter than I did my junior season. My junior season there were only a couple games where I didn’t get a person foul & my senior season I only got 2 the whole season.

Six Star — What schools showed the most interest in you

Daxton —I have had 8 d1 offers & I am committed to north Texas. Not many schools are talking to me anymore besides North Texas because I told them I was committed & it is a strong commitment.

Daxton —I don’t really have a pregame ritual besides watching my opponents film right before the game.

Daxton —Definitely math, I am very good with numbers.

Daxton —My best game was against Putnam City West this season.

Daxton —My best weight room accomplishment was probably squatting 415×5 putting my max at about 500.

Six Star — Teammates that could be stars in college

Daxton —A couple of team mates that could be stars are Aaron Corbin, my guard that played next to me & Dylan Diaz DB & RB.

Daxton —Dylan beers LB. Played with him since I was 6 & he has went 100% every play since then.

Six Star — Teammate to keep an Eye on

Daxton —Keep an eye on is our 6’5 300lb freshman OL starter Jacob Sexton. That kid is going to be a damn good player. & he’s not done growing yet.