Eisenhower ATH Coleman can do it all, brings speed, strength and tenacity to field. 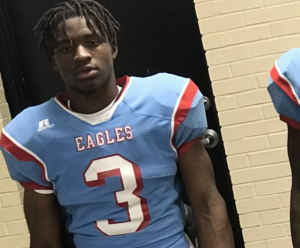 Coleman attended several camps and combines during the summer, including SWOSU, East Central, Oklahoma camp, Rivals Combine in Texas andthe VTO Camp in Texas where he received Top 5 athletes award. He was Nominated to go to North Carolina to compete with the top players from around U.S and also was VTO All American Wide Receiver.

“I play very aggressive, full speed and physical,” Coleman said. “ I play with the mentality that nobody on this field is capable of stopping me.”

Six Star Football recently caught up with Coleman and asked him about his senior season.

Six Star — My most influential person

Derek — Is my father because he set a prime example and taught me how to work hard.

Derek — I developed a better route running technique and how to be patient and Control my physicality as a DB. During this off-season I’m going to increase my weight room numbers as well as my speed!

Derek — My best game was either against MacArthur or Lawton High

Derek — My biggest weight room accomplishment is being the #1 strongest on the board with a 285 bench and 475 squat.

Derek — My 2 teammates that worked hard with me summer after summer, even after our workouts were finished were Tariq Jackson and Tre HarrisTre
Fisher
CB/QB | 6'0 | 165
Eisenhower | 2019!