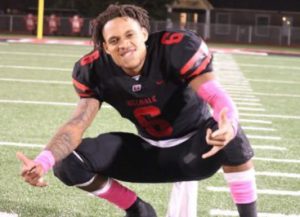 Has great open field moves, can be a human highlight film and make defenders look slow with his great moves. Is an exciting kick return specialist as well that with his speed and moves is a natural and could be used very effectively at the next level. Makes good first cuts and has good vision up field.

Devin – I feel this 2018 season was a great season no one thought we would have a winning record or even make it back to playoffs but we proved them wrong, I had a great season 1,500+ rushing yards with about 400-500 receiving yards and 30+ combined touchdowns, 2018 was one to remember as I leave highschool this year.!!

How was your offseason

Devin – During the off-season I felt I improved one on being the main leader on the team and how to interact with my teammates better when things aren’t going positive for us keep their heads up.!! Also I feel I had a lot better vision this year with seeing back cuts and just seeing the hole and how to maneuver in it.

Devin – The most influential person through my football life is probably my brother, I kinda do everything for him because he got caught up with the wrong people and is sitting somewhere where he didn’t get to see me play through middle school or highschool and it’s been kinda tough on me, but I turned that anger into something positive on Friday nights when it was time to handle business and he always told me the night before to go handle my business and make it somewhere so that’s what I’m gonna do, someone will want me. Also Coach Keenom has been a big believer in me since middle school and I love that man til death.

What camps did you attend

Devin- I didn’t really go to many camps over the summer that’s probably why I didn’t get any major exposure, I went to UCO and a Pitt State camp and those really helped with my DB technique and press man. Didn’t get to go on any visits over the summer. What colleges are looking at you

Devin – I’m blessed to say though I have 4 offers from NSU, OBU, UCO and NEO. OBU is probably the one out of 4 that is talking to me everyday just about and not just a short convo, me and Coach Lynn will talk and joke for the longest he’s a really cool coach.!!

Most people don’t know this about me but I

Devin- My pregame ritual is I have to dance the whole time til game time I feel dancing gets al the jitters out before u go ball out.!!

Devin – right now would have to be 10 Freaky Girls by 21 Savage and Metro boomin.

Devin – My favorite class this year is commitment to education, we call it senior class because you don’t get the class til your a senior at Hilldale.

Devin- I’ve had in my career, well it wasn’t a big stats game for me but still very big, about 80 rushing 3 Tds and it’s when we played FTG my junior year and were in the 2nd overtime and I took the ball outside broke a tackle and scored the winning touchdown. That will forever remain in my head because that’s our rival game and I’m the one who helped keep the rock at Hilldale once again, there’s no better feeling honestly.

Teammate likely to be college star

Devin – Kaleb ButlerKaleb
Butler
T/DE/NG | 6'5 | 335
Hilldale | 2019 is probably one of my teammates that will be a college phenom and probably NFL starting Tackle.!!

Hardest working player would be

Keep an eye on

Devin – for my little prodigy Brayson Lawson the next Hilldale running back to be aware of.!!