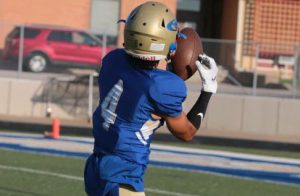 @dominic_ruff
When taking a look at some of the Tulsa areas top DBs on should not skip of a area standout, Oologah’s Dominic Ruff has all the key essentials and tools it takes to take his game to the next level and become an impact player after high school.

Dominic is considered a very aggressive player when going for the ball and is a fiery competitor who makes it tough offenses to throw in the secondary.

Dominic — This summer I worked a lot with my trainer Dwight Dobbins. I went to the USA camp, the NUC combine, TU camp.

Six Star — What did you improve upon over the summer

Six Star — What schools are showing interest in you

Dominic — I haven’t had any schools showing me interest yet but I’m hoping they come in based upon the season I’ve had and I’ve been looking at some d1 schools like North Texas, Tulsa university and d2 like NSU and UCO

Dominic — best game I had this year was against Skiatook

Dominic —I was my bench went way up

Six Star — Player to Keep and eye on