Forest, a Big and Talented OL for Putnam City North that has huge IQ for the game 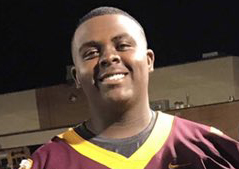 @Donovan_forest_
Why is Putnam City North so dominant? Sure you have a lot of players that get noticed in the skill positions like WR/RB/QB but if you take a closer look you will see a key in their success. He wears #76and stands 6-3, 270….Meet one of the most dominant offensive linemen in the state…Donovan Forest.

Forest has the IQ and the knowledge to make him one of the best players around. He does a great job of reading defenses and defensive line stunts. He is simply one of the best you will find and a major reason that Putnam City North is a big time program.

Six Star —What camps did you attend, what schools are looking at you

Six Star — Most people don’t know that I:

Donovan—I pray and text my dad and uncle for motivation.