Chandler's McKinney a key component to Lions offensive success in '19 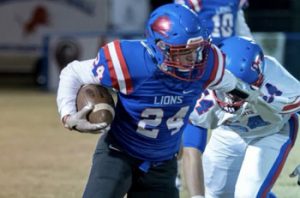 @DylanMcKinney24
Meet Junior half back/corner back and an up and coming emerging star in District 2A-2, Chandler’s Dylan McKinney.

A key player for Chandler, McKinney rushed for 175 yards and had 3 TDs vs. district foe Holdenville. McKinney racked up 1.058 yards rushing, 5.4 yards per carry and scored 15 TDs for Chandler.

Dylan – I have attended the OU football camp and learned many great things from there HB coach. I have improved on my speed

Six star football – what schools have shown interest in you

Dylan – Oklahoma Baptist invited me to a game day visit and I will go to it next football season.