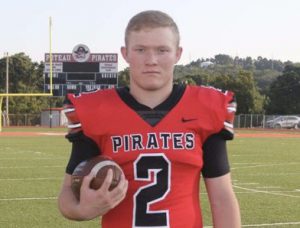 @franciseaston1
One of the top QB/RB/RS prospects in Oklahoma is Poteau’s Easton Francis. Francis, who worked very hard all summer to get stronger, has proven he is an elusive and hard to bring down player from QB/RB position in the backfield. His 205 pounds is a heavy load and his improved strength has made him a force to be reckoned with this season.

Its this tough nosed and athletic play that has earned him some attention of some schools like Texas State.

Easton —My role model is my head Coach Forrest Mazey he constantly pushes me to strive to be better and get better and he’s just a great influence for me and I need someone to push me to be better.

Six Star —What schools have shown the most interest

Easton —I’ve got letters from a lot of colleges so far and I never ever heard of some of them and I got quite a bit of letters from Texas State university as of right now like pictures of their players/posters and stuff like that.

Easton —I don’t really have a pregame ritual besides put my headphones in and just zoning out and getting focused.

Easton —My favorite class in school is science.

Easton —My best game would be against Wagoner my sophomore year they were the
three time state champs and I just had a great game and had three or four touchdowns and over 200 rushing that game.

Easton —My biggest weight room accomplishment would be when I got my bench up to 250 this year.

Six Star —Hardest working teammate/player to keep an eye on

Easton —Kagan Stockton is the hardest working player on our team. I think Kagan is gonna pick it up a lot from here until next year in football and get a good scholarship for football so I’d keep my eye on him.