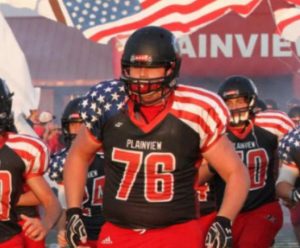 A lot of players and especially the big men, dream of going to Oklahoma State to play their college football. Eli Russ is one of those rare players who has all the tools the POKES are looking for to build their program. “My style of play is more of an aggressive type just trying to put people in the ground,” says Russ.

The pure size is intimidating, standing 6-6, 295 pounds, Eli is one of those players up front that is hard to get past. The huge OL who knows how to extend his blocks and does a great job follow all the way till the end of assignments. Blocks well and even has the ability to block LB’s down field at the next level of plays. Strong and big kid who can man handle defenders and knows how to make himself big. Great skill set and shows very good toughness that all colleges look for in a dominating OL. Next level star potential written all over him. Really like watching his skills, passion for the game, and his pure ability as a blocker.

Eli —The season has gone well so far. We’ve had a few ups and downs but what team doesn’t.

Eli —I feel that I have improved on my technique a lot more feet, hands, hips, etc.

Six Star — What camps did you attend in the offseason, how did they help you

Eli —My summer camps and visits have been pretty fun all around. They’ve really taught me that I’m not the biggest or the best out there so it really motivates me to get to that point.

Six Star — What schools showed the most interest in you

Eli —My college interest have pretty much been straight forward I committed to Oklahoma state last spring and I’ve had a few more schools invite me to games and stuff.

Eli —Is anything with David Allen Coe