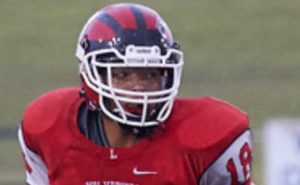 @Wiley22Eric
Eric Wiley put up 1,495 yards through the air and rushed for 9 TDs for Lawton High School this season. Wiley has a huge arm and also is an athletic play maker that can make things happen in the pocket for Lawton.

Eric—would have to be Zachary Hanna, because he was a great person to person coach and he really helped me with my game.

Eric—The only camp that I went to was the Manning Camp and I loved it, all of the coaches down there taught really well and would coach you up to what you needed to know to get better.

Eric—During the off-season I improved on my spiral, my speed, and my vision of the field. OSU was looking at me for a minute and I really like the University of Texas cause they have a good engineering program as well as a good football program.

Eric—To put my earbuds in and just sit there and focus on the game.

Eric—in Drip To Hard by Lil Baby & Gunna, because it hyped me up for games.

Eric—my Engineering class because if I can’t make it in sports I want to be a Computer Engineer.

Eric—was against Eisenhower, I had 3 rushing touchdowns and 3 passing touchdowns, but the best game for experience was the Stillwater game, showing that you really have to adapt to every team.

Eric—was right after I got cleared from the doctor after I broke my collar bone, I got back into the weight room and I was able to squat 295.

Eric—Demarcus Andrews could be a big time Safety at the College level, because he has really good reaction speed.

Eric—Definitely Hector Becerra, He worked hard in the classroom, on the field, and in the weight room.

Six Star — A player to keep an eye on