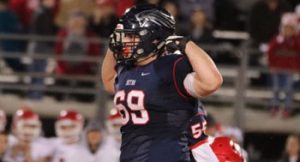 @EthanB4169
Meet a big and tough lineman that has made Metro Christian one of the best teams in Oklahoma and in Class 2A Football. Ethan is a tough and extremely aggressive two way OL/DL for the Patriots.

Benson helped Metro Christian to a great 2018 season as the Patriots made it to the 2A state semifinals which was a major accomplishment. One of the most talented and unsung heroes in Oklahoma this season will no doubt be senior lineman and team leader Ethan BensonEthan
Benson
OL | 6'1 | 280
Metro Christian | 2020, a player that deserves a lot of credit for the line play and what happens up front for Metro Christian.

Six star football- What did you improve upon this season

Ethan – I feel as though I grew a lot from my sophomore to junior year and played with a lot more intensity and a lot better hand placement and foot movement than the past year. This off-season is all about getting stronger and faster for the next season of football definitely a lot of agility.

Ethan – My parents and my coach Parker Graham have been very influential.

Ethan – Over the summer I went to camps at OK State, Baylor, Arkansas and Tulsa. What I took away from these camps are the different coaching styles and how other coaches do different things on the O-Line.

Ethan – is to listen to music and pray before each game.

Ethan – is definitely Anatomy and Physiology.

Ethan – The best game of my career has got to be against Holland Hall this year.

Ethan – are either Asher Link or Carson Callaway.