Ethan Downs, humble super standout making a name for himself at Weatherford. 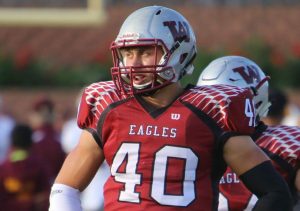 @ethandowns40
If you ask Ethan Downs

Ethan
Downs
TE | 6'4 | 235
Weatherford | 2021 about his game and what makes him a great player you will quickly notice how humble this future college football star (Offers from Nebraska/Baylor already) truly is. Although he is a star TE for Weatherford and being recruited primarily at that position, Downs has been a busy man, also seeing time at QB/RB/FB/DE and even NG/DT/OLB. When you find a truly talented athlete you might as well use him all over the field.

“My style of play in all positions is just doing my job and making a play when I can make a play, states Ethan. “I’m aggressive and I keep my eyes up scanning the field. I’m explosive on defense and offensively I’ve learned to be patient and allow the play to develop.”

Ethan —We are 7 and 3 overall heading into the playoffs but I feel like the team learns so much every week. But ultimately football is a play by play game and sometimes it works out and sometimes is doesn’t.

Six Star — What did you take away from camps this offseason

Ethan —Going to the camps this summer, I learned so much that I could apply to games and practice and it made me that much better.

Six Star — What things do you feel you improved upon the most this offseason.

Ethan —I improved upon many things, my speed and coordination, hand fighting and reading out plays. On offense I learned some new moves and found out better ways to find the green of the field.

Ethan —The most influential person in my life would have to be my father and my head football coach. My father always inspires me to be the best person I can be and to put my priorities right. My head coach and I have a cool relationship.

Ethan —I went to many camps last summer, it was kind of a whirlwind. I started off with Iron Eagle which is our summer workout program in Weatherford. We went to 5 camps- first was OSU, where I received an offer from Mike Gundy personally, then the next day we went to OU, it was a good camp but extremely hot and I didn’t preform very well. Then the next weekend we went to the Baylor camp which had over like 600 attendees. Didn’t get an offer at the camp but they did offer me the morning after Nebraska did. I went to Nebraska camp the following weekend called Friday Night Lights, while I was there, I was offered to come play at Nebraska. By this point I was extremely humbled that these schools were interested in me already. I had an invite to go to the Notre Dame camp but we couldn’t fit that into our schedule. Then at the end of July, I went to the stars at Night camp at Texas. My top 3 take always from the summer camps are #1 Speed/getting vertical. #2 Effort every play and effort on and off the field, especially in academics. And #3 Hands, using my hands and leverage to beat the other guy.

Six Star — What schools have shown the most interest in you

Ethan —Am involved in the Cavett Kids organization. My best friend is Skyler Bivens who’s had cancer 8 times and is fighting cancer even today he is the strongest and most real person I’ve ever met and I love him like a brother so we go to summer camp together and we hang out a lot and I just kind of do whatever he wants to do because he deserves it.

Ethan —I don’t really have much of a pre-game ritual. I just get myself hyped up with the team knowing battle is coming.

Ethan —Favorite song right now is Hail to the King by Avenged Sevenfold. This song just gets me in the mood of kicking butt and taking names.

Ethan —My favorite class in school is probably psychology. We have a fantastic teacher and it just really is intriguing to learn how the mind works.

Ethan —The biggest game I’ve had in my career so far has got to be the Piedmont game in my freshman year I was the McDonald’s player of the game and I scored the only touchdown we had and I got a safety on their quarterback that sealed the game for us.

Ethan —Hardest working players are Carson young, watches tons of film and leads the defense, and Daniel Hubin, smallest guy on the team but works the hardest and is one of the fastest.

Ethan —The player to keep an eye on is Sam Hoffman, Freshman back up QB and Running Back. Thank you for this opportunity.