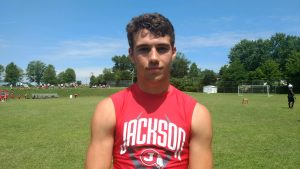 JACKSON — Ethan Laster is emerging as one of the better all-around players in the southeast Missouri area after a strong junior season for the Jackson Indians a year ago.

A 5’11, 180-pound 2018 running back, Laster has taken on a role within Jackson’s “leadership council” which consists of 10 players who have been charged with taking care of everything from the locker room, weight room and the field.

“We pump the guys up, settle disputes, and keep everyone on task,” Laster said. “I believe that I bring a solid anchor to my team that keeps everything stable and running smooth.”

On the field, Laster has been counted on for production as a runner and has made big plays on both sides of the ball.

“My job as a running back is simple — I can either get a direct handoff from the quarterback and then trust my lineman to make a hole for me to run through, I could catch a pass from the QB and gain as much yardage as possible, or I could stay back in the backfield and protect the quarterback while he is throwing the ball,” Laster said.

A year ago, Laster had one of his best games of the season against Poplar Bluff in a key game that ensured a sweep of a conference title. He came up with two interceptions and 11 tackles as a safety.

“In that game I mainly played defense because thats where the team needed me most,” he said. “Safety isn’t my favorite spot on the field but I sucked it up and did my best so that my team could win the game … I think that was very selfless and I considered what was better for the team than just what I wanted to be the star.”

4) some things I am working on this season is my footwork when I am at a reviewer position. I am trying to get off the ball and blocker better than I have before. Also on defense I am now an outside linebacker so I have been working very hard to learn that position.

Laster says he began playing football in fourth-grade as part of the JAYF program in Jackson He says the most influential person in his football career has been his travel coach Ron Hobeck.

“He taught me how to hit and how to take a hit,” Laster said. “He taught us to not be scared on the field and that if we just play our best the ball will bounce our way and we will win.”

On the field, Laster is a fan of NFL rookie Christian McCaffrey and has tried to implement some elements of the former Stanford star’s game into his own.

“I like him because he doesn’t look like much of a player but when he steps on the field he is electric and he makes his presence known no matter what position he is in,” Laster said. “I look forward to seeing where the NFL takes him.”

Laster does not currently hold any offers and hasn’t received much interest from any college programs, but is holding out hope that a big senior year could change that.